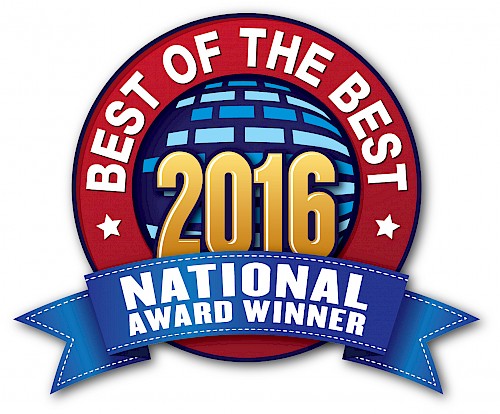 Best of the Best Television is proud to announce that Wilson’s Home Improvement has been chosen for our 2016 Best of the Best list of America’s Best companies. Wilson’s has a long history of doing very high quality work to the people of Arkansas. Wilson’s is a family owned company which has worked for years to elevate the home improvement industry. Paul and Sandy Wilson, their family, and their very dedicated team, almost 100 strong, simply do not cut corners in terms of quality workmanship, and outstanding customer service. Wilson’s has consistently gone the extra mile in terms of training, and proper installation of siding, and windows. Best of the Best Television researched Wilson’s extensively. We examined every aspect of their business, without telling anyone at Wilson’s, and found that Wilson’s is one of the best companies of this size in the country in terms of customer service.

Best of the Best Television is considered by many as the most credible business rating firm in the country. Best of the Best does what the others who rate companies do not. They investigate a company without telling the company, and never take any money up front from a company.

Best of the Best Television was created by an 8 time Emmy Award winning journalist named Rich Noonan. Rich was one of the most respected reporters in the country during his television career. He won lots of awards over a 25 year career, often for digging deep and exposing the truth about new stories. Rich and his team of journalists use their investigative talents today to really look into companies. They find out everything there is to know about the company owners, how they treat their customers, and employees, and how they run their businesses. If the company has a history of running their businesses with honesty, integrity, and financial stability, then Best of the Best might choose that company for a video profile.

Remember, Best of the Best never accepts money up front, or tells a company owner that the company is being investigated which insures that when a company wins a national Best of the Best honor...it’s because that company has earned it through integrity, honesty, and a history of treating customers only one way…the right way.

Comments: No comments yet

< Time to replace those windows, NOW!

Alleviate dust in your home with new windows! >